In Search of Inner Liberation by Peter S. Lopez aka @Peta_de_Aztlan 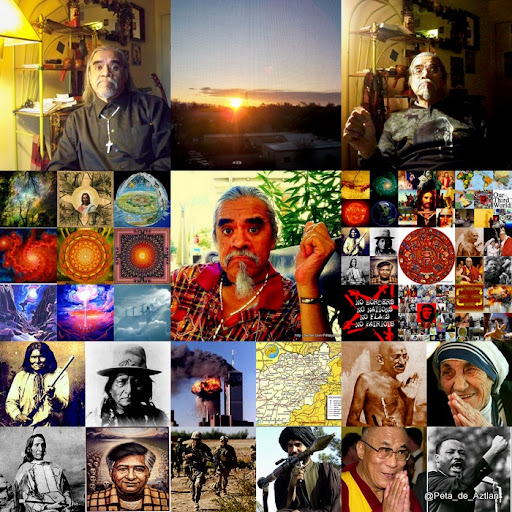 “The liberation of the oppressed is a liberation of women and men, not things. Accordingly, while no one liberates himself by his own efforts alone, neither is he liberated by others. Liberation, a human phenomenon, cannot be achieved by semi-humans.”
― Paulo Freire,…

Signs from the other-side

We take so much for granted and do not realize that the Astral plin is right next to us. We have Guardians and Guides that always leave us messages that we simply take for granted. Here are some of those messages: Do the lights flicker on and off, dose a picture fall down or dose a book fall out of the shelf, do you find coins on the grown (pennies from heaven) dose the phone ring and no one is there, do you smell perfume or tabacco in the air, dose the water facet turn on by itself, do you…

She painted her aura Upon the night, And my Soul Armageddon? There is Nothing to Fear but Fear Itself

"Discover how to speed up your awakening, why connecting with your higher self is required for resolving life's challenges and creating a life you love, and why it's how to prepare for 2012"

After eons of struggle, "learning through contrast," and living in the "dark age" (the dark part of a long cycle that's about to end), humanity is ready for real change. For light and joy. For a Great New Cycle, the "Golden Age." However, this will not happen automatically. It will require that you as an individual change your life direction by consciously connecting and integrating with the spiritual part of you--your higher…

When we do good things for people, we stregthen our connection to man-kind. Being of service to those in-need puts us in-touch with our own humanity. The desire to show care and concern for anothers sucess and happiness is naturally in-grained as our desire to be good to ourselves. We often find that the return is greater when we use our resources for the good of those around us. We feel connected and indespensible and are immediately struck by how incredably blessed we are to be in a… Energy Report For June 28, 2012
Today’s Energy is anxious and overwhelming. So much is happening so quickly, that we cannot keep up. Fast and Furious, Green Light, Obama Care, Stock Markets and more and more.
Our world is in chaos and emotions are high, as are fears. We…
Continue

Pets and the Afterlife Pets and the Afterlife

During one of my Spirit Message Nights, a participant asked if pets ever come through by themselves without spirit people bringing them through. I…
Continue I received a gift and it was a Cetic cross. It was very beautiful and I never had a cross in my home. I dont like what it represents, I mean my relgious concept. I always thought the Celtic was alittle evil but i was wrong as I did some research. There are 2 interpetations and I will give you one right now: The 4 corners represent, earth wind , fire, water. also, 4 directions of the compass, north south, east and west. 4 parts of man, Mind, sould, heart and body. 4 ways of asencion, self,… For some, 2012 heralds fear. This is thanks to recent, often vivid, interpretations of a centuries earlier Mayan civilization set of beliefs. Some people believe the world will end or that there will be catastrophes on a large scale, all because the Mayan Long Count calendar is thought to be reaching the end of its cycle in 2012.

A Question of Balance

Greetings and Blessings {{{All}}} I found this full album version of, what i consider, one of the finest musical interpretations of the path less traveled.....from question to balance....it is rather dated(1970)...then again, so am I

I do hope you enjoy this blast from the past...and perhaps, our future...in balance.

"Your Peace and Your Calm... and Morning Prayer" by Maureen Moss As always I pray you are…
Continue

Dear Ones,
When we take the time to really notice Nature we can see many similarities between Nature & Humans showing us Oneness at its best.
Trees for example ,how alike we all are to trees, think about how beautiful their energy is standing proud & tall with their outstretched limbs to give protection and home to many until suddenly a storm appears and strips their branches of leaves and cover leaving…

“We Build a Lighted House and Therein Dwell”

“We Build a Lighted House and Therein Dwell”

We are more than half way through the year, moving swiftly toward winter solstice when three great time cycles end, and three greater time cycles begin. Humanity stands at the crossroads - to envision, build and construct the new Aquarian world, the new culture and civilization. Or not.

As the Piscean Age was the Age of Religion, the Aquarian Age is the Age of Humanity – no longer an age of kings,…

Claudia McNeeley's Energy Report For June 27, 2012
Today’s Energy is dense and heavy. We feel like we are moving through sludge, like we just cannot manage to put one foot in front of the other. We want to get things accomplished, but it just takes too much effort. We feel like we are moving in slow motion.
We are nauseated, don’t want to eat, burning up and…
Continue

Courage for Our Times