Matter is Imperson Spirit is Person

How do we understand the difference between matter and spirit?
Matter moves according to prearranged rules that were laid down since the beginning of creation.
These rules were originally created by Lord Brahma who first realized these rules by performing TAPA.
When Brahma was born on the lotus flower
That emanated from the Naval of Maha Vishnu
He didn't know where or who he was.
When he realized he was seated on a Lotus that grew out of the water,
He climbed down the stem of the lotus and put his ear to the water
There he listened and heard a sound,
TA PA

From hearing those bija sounds he understood how to create the entire universe--
What is TaPa what does it mean and how does the sound create?
In sanskrit Tapasya means heat

By suffering one can attain bliss. Being born in the material world is a great blessing.
For through the inevitable suffering in the impersonal material world one can become purified.
Reformed. The material world is the opposite world. The mirror image of the spiritual realm.
But something is missing. It works like a machine, and doesnt consider who or what anything is. Machine is Imperson.

Spirit works differently spirit is person and the person is love itself the monument of 64 excellence of love.
Brahma by meditating , searching His self consciousness , it was revealed to Him that he was Krishna's eternal maidserveant. Even though he couldn't understand everything about His relationship he became acquainted with the ocean of the Vaishnava truths.
He sang these hymns in praise of Govinda and its helpful for devotees to remember them every day.

There is information available in many great books from the east.
They are collectively known as the Vedas but more specifically the Maha bharta and the Ramayana
are of particulr interest to Vaishnava's.

Summary of the Mahabharata
The Mahabharata tells the story of two sets of paternal first cousins--the five sons of the deceased king Pandu (the five Pandavas and the one hundred sons of blind King Dhritarashtra--who became bitter rivals, and opposed each other in war for possession of the ancestral Bharata kingdom with its capital in the "City of the Elephants," Hastinapura , on the Ganga river in north central India. What is dramatically interesting within this simple opposition is the large number of individual agendas the many characters pursue, and the numerous personal conflicts, ethical puzzles, subplots, and plot twists that give the story a strikingly powerful development.

The five sons of Pandu were actually fathered by five Gods (sex was mortally dangerous for Pandu, because of a curse) and these heroes were assisted throughout the story by various Gods, sages, and brahmins, including the great sage Krishna Dvaipayana Vyasa (who later became the author of the epic telling this story), who was also their actual grandfather (he had engendered Pandu and the blind Dhrtarastra upon their nominal father's widows in order to preserve the lineage). The one hundred sons of the blind king Dhartarashtra, on the other hand, had a grotesque, demonic birth, and are said more than once in the text to be human incarnations of the demons who are the perpetual enemies of the devotees of the lord. The most dramatic figure of the entire Mahabharata, however, is Sri Krishna who is the supreme personality of Godhead himself, descended to earth in human form to reestablish his devotees as care takers of the earth, and who practice Dharma. Krishna Vasudeva was the cousin of both parties, but he was a friend and advisor to the Pandavas, became the brother-in-law of Arjuna , and served as Arjuna's mentor and charioteer in the great war. Krishna Vasudeva is portrayed several times as eager to see the war occur, and in many ways the Pandavas were his human instruments for fulfilling that end.

The Dhartarashtra party behaved viciously and brutally toward the Pandavas in many ways, from the time of their early childhood. Their malice displayed itselfwhen they took advantage of the eldest Pandava, Yudhishthira (who had by now become the ruler of the world) in a game of dice: The Dhartarashtras 'won' all his brothers, himself, and even the Pandavas' common wife Draupadi They humiliated all the Pandavas and physically abused Draupadi; they drove the Pandava party into the wilderness for twelve years, and the twelve years of exile had to be followed by the Pandavas' living somewhere in society, in disguise, without being discovered.

The Pandavas fulfilled their part of that bargain by living out side the kingdom, but the evil leader and eldest son of Dhartarashtra, Duryodhana , was unwilling to restore the Pandavas to their half of the kingdom when the thirteen years had expired. Both sides then called upon their many allies and two large armies arrayed themselves on 'Kuru's Field' (Kuru was one of the eponymous ancestors of the clan), eleven divisions in the army of Duryodhana against seven divisions for Yudhishthira. Much of the action in the Mahabharata is accompanied by discussion and debate among various interested parties, and the most famous dialog of all time, Krishna Vasudeva's ethical lecture and demonstration of his divinity to his devotee and friend Arjuna (the Holy Bhagavad Gita appeared in the Mahabharata just prior to the commencement of the world war. Several of the important ethical and theological themes of the Mahabharata are tied together in this Gita, and this "Song of the Blessed One" has exerted much the same sort of powerful and far-reaching influence in the Vedic Civilization that the New Testament has had in the Christian world. The Pandavas won the eighteen day battle, but it was a victory that deeply troubled all except those who were able to understand things on the divine level (chiefly Krishna, Vyasa, and Bhishma the Bharata patriarch who was symbal of the virtues of the era now passing away). The Pandavas' five sons by Draupadi, as well as Bhimasena and Arjuna Pandava's two sons by two other mothers (respectively, the young warriors and Abhimanyu, were all tragic victims in the war. Worse perhaps, the Pandava victory was won by the Pandavas slaying, in succession, four men who were like fathers to them: Bhishma, their teacher Drona , Karna (who was, though none of the Pandavas knew it, the first born, pre-marital, son of their mother), and their maternal uncle Shalya (all four of these men were, in succession, 'supreme commanders' of Duryodhana's army during the war). Equally troubling was the fact that the killing of the first three of these 'respected elders,' and of some other enemy warriors as well, was accomplished only through ' trickery', most of which were suggested by Krishna Vasudeva as absolutely required by the circumstances.

The ethical gaps were not resolved to anyone's satisfaction on the surface of the narrative and the aftermath of the war was dominated by a sense of horror and malaise. Yudhishthira alone was terribly troubled, but his sense of the war's wrongfulness persisted to the end of the text, in spite of the fact that everyone else, from his wife to Krishna Vasudeva, told him the war was right and good; in spite of the fact that the dying patriarch Bhishma lectured him at length on all aspects of the Good Law (the Duties and Responsibilities of Kings, which have rightful violence at their center; the ambiguities of Righteousness in abnormal circumstances; and the absolute perspective of a beatitude that ultimately transcends the oppositions of good versus bad, right versus wrong, pleasant versus unpleasant, etc.); in spite of the fact that he performed a grand Horse Sacrifice as expiation for the putative wrong of the war. These debates and instructions and the account of this Horse Sacrifice are told at some length after the massive and narrative of the battle; they form a deliberate tale of pacification that aims to neutralize the inevitable reactions of the war.

In the years that follow the war Dhritarashtra and his queen Gandhari , and Kunti , the mother of the Pandavas, lived a life of asceticism in a forest retreat and died with yogic calm in a forest fire. Krishna Vasudeva departed from this earth thirty-six years after the war. When they learned of this, the Pandavas believed it time for them to leave this world too and they embarked upon the 'Great Journey,' which involved walking north toward the polar mountain, that is toward the heavenly worlds, until one's body dropped dead. One by one Draupadi and the younger Pandavas died along the way until Yudhishthira was left alone with a dog that had followed him all the way. Yudhishthira made it to the gate of heaven and there refused the order to drive the dog back, at which point the dog was revealed to be an incarnate form of the God Dharma (the God who was Yudhishthira's actual, physical father), who was there to test Yudhishthira's virtue. Once in heaven Yudhishthira faced one final test of his virtue: He saw only the Dhartarashtra Clan in heaven, and he was told that his brothers were in hell. He insisted on joining his brothers in hell, if that were the case! It was then revealed that they were really in heaven, that this illusion had been one final test for him.

Truth is more powerful than gold or silver

The impersonal material energy. It is the covering of Krishna's universal form.
Without Krishna's animation it has no motion or life.

In the same way our physical body is the covering of our spirit and it appears animated because the spirit soul along with the supersoul has entered within.

But wait---- there's still more
We can work together as a soul group and create a merkaba of truth.... 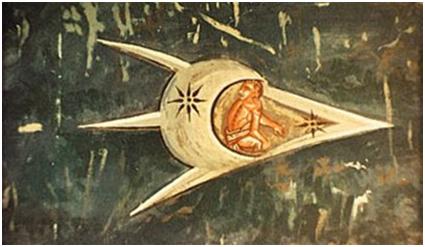