I don’t know about you but when I hear the words “sixth sense” I always think about that movie in which those words “I see dead people” was made famous. But what is the sixth sense? The ability to see dead people? I think it’s more involved…more complex than that.… This article was written by Lexa Olick

Simplicity: Belonging to the Earth

Bruce Doing the Hsing-i Santi Posture Used to Build ChiPut simply, chi (qi) is that which gives life. In terms of the body, chi is that which differentiates a corpse from a live human being.

To use a Biblical reference, it is that which God breathed into the dust to produce Adam. Chi is also the basis of acupuncture.

A strong life force makes a human being totally alive, alert and present while a weak force results in…

Premonition Premonition is a type of prophecy consisting of an impressionable warning of a future event. The phenomenon is characterized by such sensations as anxiety, uneasiness, a vague feeling o… Premonition is a type of prophecy consisting of an impressionable warning of a future event. The phenomenon is characterized by such sensations as anxiety,…

The soul is divine We cannot describe the natural history of the soul, but we know that it is divine. I cannot tell if these wonderful qualities which house today in this mortal frame shall ever reassemble in equal activity in a similar frame, or whether they have before had a natural history like that of this body you see before you; but this one thing I know, that these…

Live in the Here & Now Live in the Here & Now

Imagine you are on a path in a patch of shadowy woods. The path is clearly marked but there are dips and roots in it, and limbs have fallen onto it. The woods are filled with delicate flowers and ferns and…

Saturday is the first full moon solar festival of the New Year. The full moon is a timing mechanism. It informs us that on one side of the Earth is the moon and on the other is the Earth.

During full moon times the light of the moon (emotions, the past many-eons-ago when we lived on the moon) is shielded from us. Instead, the moon receives and reflects back to Earth only the light of the Sun, which, at this Saturday’s full moon, is Aquarius. The Sun’s light transforms and…

In Cases of Miscommunication or Misunderstandings, Mediation May Be Appropriate

Secret Doctrine in Symbol and Glyph

Uygur had DeWolf on to talk about how people get sucked into Scientology. “How do they do it?” asked…

The Catacombs of Paris 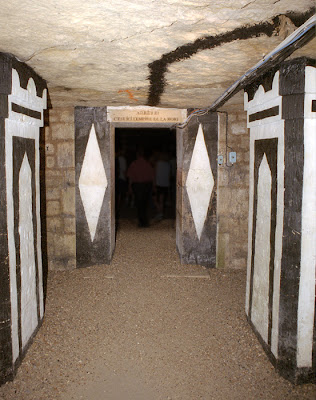 Most of all of Paris' larger churches once had their own cemeteries, but city growth and generations of dead began to overwhelm them. From the late seventeenth century, Paris' largest Les Innocents cemetery was saturated to a point where their neighbors were suffering from disease, due to contamination caused by improper burials, open mass graves, and earth charged with…
Continue

Saturday is the first full moon solar festival of the…

The Sacred Pilgrim in Greek Thought The fourth spiritual law of success is the Law of Least Effort. This law is based on the fact that nature's intelligence functions with effortless ease and abandoned carefreeness.… We seek to avoid suffering, yet it is through suffering that we so often learn life's lessons and develop compassion. Suffering and compassion lie at the heart of Buddhism. Born a prince in northern India, Gautama was so disturbed when he witnessed old age, disease, and death that he left his palace to…