“Adorabilis”, the new cute Octopus the new kid on the block “Adorabilis”, the new cute Octopus on the block

Is there a scientific measure for cuteness? Maybe not, but a researcher wants to give this species of octopus a proper name to describe it. 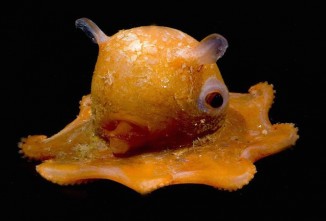 Stephanie Bush, a researcher at the Monterey Bay Aquarium Research Institute in California, thinks she’s discovered a new species of flapjack octopus and wants to give it an appropriate Latin name — “Adorabilis” — because it’s just so adorable.

The little cephalopod, which lives in ocean depths of 450 meters, is only about seven inches across, with big eyes, little fins that look like puppies’ ears, and webbing connecting its eight arms.